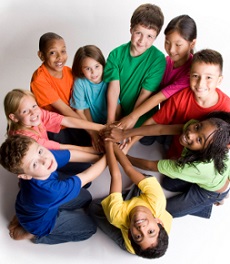 Discrimination is an important and difficult issue which affects many people at some time.  Complete the following three activities to explore this issue.

Watch these videos where Haisam and Meg answer the question: Have you ever experienced discrimination or faced prejudice?

In the past Australia had laws that were discriminatory and that aimed to create a 'White Australia'.

The Immigration Restriction Act was one of the first laws passed after Australia became a Federation in 1901.  The Parliament decided that a dictation test would be used at Australian ports as the means of excluding people.  The law stated that a 'prohibited immigrant' included:

Any person, who when asked to do so by an officer, fails to write out a dictation and sign, in the presence of the officer, a passage of fifty words in length in an European language directed by the officer.

The dictation test meant people were excluded from entry because of their language skills, not their race.  In practice, the test was only given to 'non-white' migrants and was nearly impossible to pass.  It was an effective way of keeping 'non-whites' out of Australia.

How would you go at the dictation test?  Get a pen and paper ready before playing this audio file.  You will be given the test that was used at Australian ports from 16-28 February 1927.  You must write out the dictation, without spelling or grammatical errors, on your first hearing of the passage.


When you have finished, show transcript

The history of inventions seems to teach that persistent attention to particular problems on the part of men of average capacity has produced surprising results.  Naturally, the clever man's concentration will produce greater results, but in the long run the persistent man with ordinary brains achieves, comparatively speaking, positions of greater distinction.

Do you know your rights and obligations under the Racial Discrimination Act?  Take this quiz to learn more about this important legislation.  The button below will take you to a new page.  When you have finished, you will be brought back here.

Proceed to the quiz